English professor Tom Dilworth is finding audiences receptive to his masterwork, a 432-page biography of David Jones, a visual artist and poet whom Dr. Dilworth calls “the least-known great modernist.”

Dilworth has been touring in support of his book, David Jones, Engraver, Soldier, Painter, Poet, since its publication April 6. A Windsor launch event is being planned for this fall.

“Research and writing this work took 31 years,” he says. “It deals with all aspects of his life: his engravings, particularly his book illustrations, and also his watercolour landscapes and portraits of 1926-32, his still-life flowers in glass chalices of the 1950s, and his painted inscriptions (an art form he invented) of the 1950s and ’60s.” 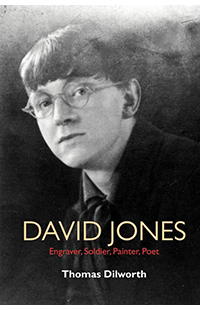 “In Parenthesis (1937) is generally acknowledged as the greatest literary work to emerge from World War I, and The Anathemata (1952), an anatomy of Western culture, is Jones’s greatest achievement,” Dilworth says. “W.H. Auden considered it the greatest long poem of the 20th century.”

Jones achieved all this while suffering considerable emotional distress. As a result largely of post-traumatic stress from his time in the trenches, he suffered two crushing nervous breakdowns and decades of depression.

“His making so much intelligent beauty in such circumstances is the single greatest existential achievement of international modernism,” says Dilworth.

The book, which boasts 162 images — one-third of them colour reproductions of Jones’s artworks — is published in North America by Counterpoint Press, and in the U.K. by Jonathan Cape.

During Dilworth’s tour, which has encompassed Washington DC; Aberystwyth, Wales; London, England; and Amsterdam, Netherlands, it has received excellent international reviews, including a selection as “Book of the Week” by the BBC program Open Book.