UWindsor creative writing professor Susan Holbrook says she is “thrilled” that her book Throaty Wipes has been short-listed for the 2016 Governor General’s Literary Award in Poetry.

“To be recognized at the national level, by a jury of fellow Canadian writers, is very meaningful to me,” she says. 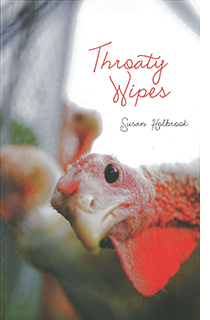 The Governor General’s Literary Awards are one of Canada’s oldest and most prestigious literary awards programs, founded in 1936 and administered by the Canada Council for the Arts since 1959. Each winner receives $25,000; non-winning finalists each receive $1,000.

Dr. Holbrook’s poetry books include the Trillium-nominated Joy Is So Exhausting, Good Egg Bad Seed and misled, which was shortlisted for the Pat Lowther Memorial Award and the Stephan G. Stephansson Award. Her textbook How to Read (and Write About) Poetry was released in 2015. She edited The Letters of Gertrude Stein and Virgil Thomson: Composition as Conversation with UWindsor colleague Thomas Dilworth.

She says she “couldn’t have written” her latest work if she wasn’t on faculty at the University of Windsor.

“The English department is such an inspiring place—full of people who love talking about, writing about, thinking about and writing literature,” says Holbrook. “And I chose my editor, Nicole Markotic, from this department. As our students will tell you, she is a wildly gifted and tough editor—I’ve always said the best in Canada—so I really do share this honour with her.”

On October 25, the Canada Council will announce the winners, who will receive their awards from Gov. Gen. David Johnston at Rideau Hall on November 30.