The University of Windsor will confer degrees on more than 800 graduating students during two sessions of its 106th Convocation ceremonies at 10 a.m. and 3 p.m. on Saturday, October 15, in the St. Denis Centre.

The University will bestow honorary doctor of laws degrees on two outstanding individuals: actor Stephen Ouimette, director of the Stratford Festival’s Birmingham Conservatory for Classical Theatre; and Senator Murray Sinclair, former justice of the Court of Queen’s Bench of Manitoba.

Ouimette, a graduate of the UWindsor acting program (BFA 1977), is a 26-season veteran on the Stratford Shakespeare Festival stage, having played leading roles in King Lear, A Midsummer Night’s Dream, Twelfth Night, All’s Well That Ends Well, The Taming of the Shrew, The Tempest, As You Like It, King John, Troilus and Cressida, Hamlet, Richard III, and Julius Caesar—as well as numerous works by other authors.

His stage career spans over 30 years and several continents, including a Broadway production of La Bête and a star turn opposite Nathan Lane and Brian Dennehey in The Iceman Cometh at Chicago’s Goodman Theatre and the Brooklyn Academy of Music.

Ouimette has played leading roles in many television and film productions, winning a 2007 Gemini Award for his work on the television series Sling & Arrows. He provided voices for many animated shows, including Beetlejuice, Babar, Scaredy Squirrel, and Maggie and the Ferocious Beast. He will receive an honorary doctor of laws degree and will address Convocation at the 10 a.m. session. 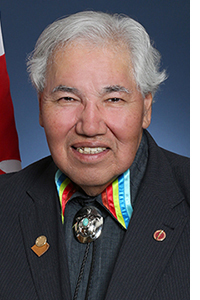 Sinclair was appointed to Canada’s Senate in April 2016, after 25 years serving the justice system in Manitoba. He was that province’s first Aboriginal judge and just the second in Canada.

He served as an adjunct professor of law at the University of Manitoba. His active engagement in his profession and his community has won numerous awards, including the National Aboriginal Achievement Award, the Manitoba Bar Association’s Equality Award (2001) and its Distinguished Service Award (2016).

He will receive an honorary doctor of laws degree and will address Convocation at the 3 p.m. session.

Fall Convocation opens at 10 a.m. on Saturday, when degrees will be conferred on graduating classes (including graduate studies) in the faculties of engineering, nursing, and science.

At the 3 p.m. session, degrees will be conferred on graduands in the faculties of arts, humanities and social sciences; business; education; human kinetics; and law.