Sometimes you have to fail to succeed. That’s the case with a project for third-year students in Amr El Ragaby’s class finite element for analysis and design.

The civil engineering professor challenges groups to design and build models of a truss bridge, predicting how they will react when subjected to pressure from a custom-built crusher. They are rewarded for designs that hold up well, and for accuracy in their analysis of the load capacity of their models.

“We try to give the students a hands-on experience to apply the skills that they learn in class in a competitive environment,” says Dr. El Ragaby. “This project gives them a chance to connect the dots.”

A new wrinkle this year was an additional requirement—modelling concepts for the Gordie Howe International Bridge currently planned to link the Herb Gray Parkway and I-75 highways.

“The Windsor area is very excited about the new bridge,” El Ragaby says. “That’s why we need to challenge the students and push their imagination to come up with a creative design.”

Matt Oldewening, senior staff engineer with the Windsor-Detroit Bridge Authority, was one of the judges for the competition held Tuesday in the Centre for Engineering Innovation. He says the students obviously put a lot of research and thought into their work, and adds the load-testing portion was instructive: “You don’t like to see failures out in the real world, but they teach you more than anything else.”

The bridge authority will display some of the model designs in the lobby of its home offices in downtown Windsor. 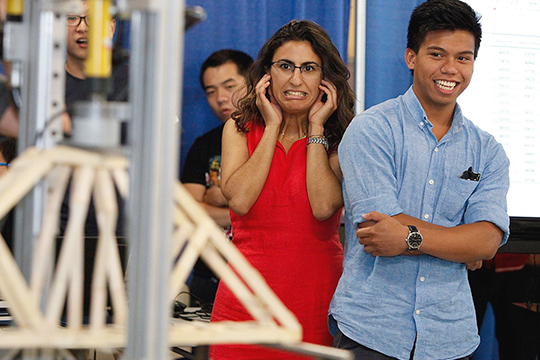 Students show contrasting reactions to the crushing of their bridge design, Tuesday in the Centre for Engineering Innovation. See more photos from the event on the UWindsor Engineering Facebook site.