Maher El-Masri will work with clinicians at Windsor Regional Hospital on a project that could dramatically improve outcomes for dialysis patients like this one.

Nursing researchers teams up with WRH for dialysis research project

A ground-breaking study being led by a UWindsor researcher and his partners at Windsor Regional Hospital has the potential to dramatically improve conditions for kidney dialysis patients while saving the health care system untold millions of dollars. 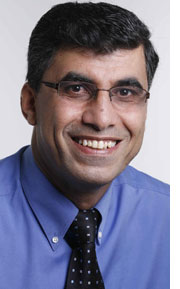 Nursing professor Maher El-Masri is working with Al Kadri, chief of medicine at the hospital’s Ouellette Avenue campus and Wasim El Nekidy, a renal clinical pharmacy specialist, on a Kidney Foundation of Canada-funded study to determine the best dosage of a medicine administered to hemodialysis patients to prevent blood clotting during their treatments.

Hemodialysis is a renal therapy used for those whose kidneys have failed, and it essentially performs the function of a kidney, filtering waste products from the patient’s blood. A preferred method of treatment, Dr. El-Masri said, is to surgically implant a fistula that mixes arterial and venous blood at the site where the treatment is being administered.

Some patients aren’t prepared for surgery, however, and a catheter is often used as a temporary measure, El-Masri said. Complications like blood clotting can occur with a catheter, and changing them can be risky, so a medicine called Alteplase (tPA) is used to dissolve clots.

Doctors used to use 1 mg of the drug, but that recently changed to 2 mg. The problem, however, is that there are no hard and fast guidelines on the right dosage, according to Dr. Kadri, who is also the director of his hospital’s renal program.

“There have been suggestions you could get away with a lower dose, but there’s no clear cut evidence to tell us best dosage for restoring catheter functioning,” he said, adding that with about 300 patients a year receiving dialysis locally, the budget for the medicine runs into the “hundreds of thousands of dollars.”

Dr. El Nekidy said Alteplase is an expensive medication, but replacing a catheter is much more expensive and invasive than treating the blood clot.

“Administering the right dose of the medication can save the hospital money in terms of less interventions and lower the risk of invasive procedures for the patient,” he said.

The research teams will conduct a clinical trial of 136 hemodialysis patients who require tPA, using a double blind, randomized study, meaning both the patients and the researchers won’t know which patients are receiving the 1 mg or 2 mg dosage. After the study is complete, they’ll analyze clotting events and compare them to the data on patient dosage.

Terry Young, Ontario Branch president of the Kidney Foundation of Canada—which provided $92,000 for the study—said the health charity is extremely pleased to be funding the research.

“This research aims to decrease the burden of kidney failure treatment on both patients and the healthcare system,” he said. “Investigating the best dose of Alteplase to be used to break the clot at the hemodialysis catheter will decrease use of invasive and more expensive procedures on people being treated for kidney failure.”

Kadri said he’s very excited about working with El-Masri on the project.

“We have the clinical and medical expertise,” he said, “but Maher brings quite a bit of research and bio-statistical expertise. This could result in fewer procedures, less replacements, and keeping the lifeline open for dialysis patients. This is something that affects every dialysis unit in the world, so we could be talking about saving millions of dollars globally.”