A graduate student trying to determine how climate change is affecting Arctic animals like ringed seals who rely on very specific food resources, has become the first University of Windsor student ever to receive a scholarship of its kind in order to continue his research in the north. 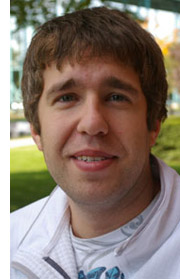 “This is a great honour,” said Yurkowski, who studies under the tutelage of professor Aaron Fisk. “It’s a substantial sum, and it will go a long way towards helping me continue my research. Ultimately, it’s all about better understanding the food web and the behaviour of ringed seals, which are a critical part of Inuit culture throughout the circumpolar Arctic.”

A member of the Ocean Tracking Network, Yurkowski has spent the last several years traveling back and forth between Windsor and Resolute, Nunavut, where he uses high-tech satellite tracking devices to monitor the behaviour of ringed seals. The goal of his research is to determine whether those seals, who are a key species in Arctic food webs, feed on specific food sources, and if they do, whether that ‘resource-use specialization’ is particularly pressing, given the implications of climate change.

“Climate change can pose severe implications to Arctic ecosystem structure,” he said. “Northerners are particularly concerned about their significantly changing ecosystem and how these changes may impact ringed seal ecology.”

Dr. Fisk said Yurkowski has done a tremendous amount of work to prove his credibility and worthiness of the award.

“Dave has been doing consistently solid research, and he’s contributing a great deal of new knowledge to an area that’s understudied, but critically important to northern culture,” he said. “He’s an excellent scientist with a very bright future in this field of study.”